The other night, Cullen decided it was time for a treat. I had been hurting all day from the kid’s positioning, and we’d been pretty busy out of necessity. We went to Kroger for some lazy supper items, and splurged on a pint of Graeter’s mint chip ice cream. If you’re unfamiliar with Graeter’s, they’re one of the oldest family-run ice cream manufacturers in the States, and they’ve been making ice cream via their French pot method since 1870. All their ice cream is made in two-gallon batches, and hand-packed in containers to ship directly to their scoop shops, grocery stores, or the consumer. I grew up on Graeter’s, but I hadn’t had it since I was small, and couldn’t ever justify the price tag in store.

Boy, was I glad we spent that little extra for some damn good ice cream. It was so worth it.

However good a pint of Graeter’s is, I still can’t justify the price tag every time we make a trip to the grocery. Cullen mentioned making a batch of mint chip at home, and a mild obsession was created. It appears that I don’t nest, so instead I suppose I cook. END_OF_DOCUMENT_TOKEN_TO_BE_REPLACED

We went to one of the local farm stands and picked up some fresh strawberries. Other than strawberry shortcakes, we didn’t have any idea what to do with them – then I got the “wild idea” to make ice cream with them before they wasted away. Again, too lazy to deal with separating eggs and wasting whites, or to cook up a custard (although the recipe across the page from the one I used looked pretty damn tasty). I found the recipe for Vanilla Ice Cream and thought “what the hell, let’s go.” I halved the recipe since my ice cream maker only makes a quart at a time, and still got just shy of two.

END_OF_DOCUMENT_TOKEN_TO_BE_REPLACED

I went to Sam’s a week or two ago with my mother-in-law and Cullen, so we could check out various things (food, storage buildings and the compost bin we brought home, but anyway). She and I got in a conversation over food in the produce section (Cullen was elsewhere at the time), specifically how she’s trying to introduce herself to more produce. She really likes fruits and veggies; she just doesn’t have a habit of eating a whole lot of them at any given time, and they have a tendency to go bad before she gets around to a craving again. We picked up a yellow honeydew out of curiosity and a 3-pound unit of ripening kiwis to split. She even showed me how to peel a kiwi, which was not at all like I have done before (and of course, much easier). 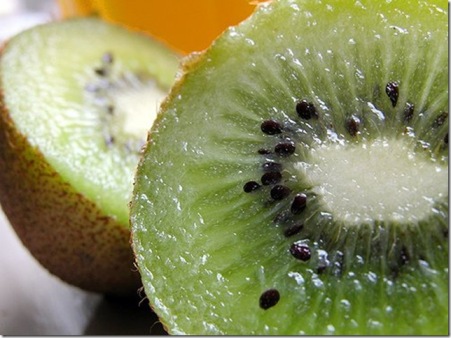 Now, to be honest, I like kiwis, but they’re not high on my list of fruits that I can’t stand to live without. Apples, white grapes, melons, mandarin slices, mostly any berry (especially blackberries) are about the extent of my list. Oranges never held much appeal for me (too much work), and I don’t eat lemons or limes for their own qualities. Mangoes are good, but expensive; never tried a papaya; bananas are an if-I-have-to fruit; pineapples are okay; melons are extremely seasonal (though I love them); scuppernongs and muscadines are something I think you just have to have a taste for; and I absolutely hate grapefruit. Maybe I’m more sheltered in the world of fruit than I thought.

END_OF_DOCUMENT_TOKEN_TO_BE_REPLACED

Instead, I went searching for a fresh coffee icecream, and after much research, finally found Fresh Coffee Premium Icecream over at Not Eating Out in New York. Much rejoicing was had, custard was made, and icecream was created – a lovely creation that was like eating a cup of coffee straight out of my grandfather’s hand. And when you add Starbucks chocolate-covered coffee beans as a bonus? Oh my.

More on this later. I have lots of things to do today, but I thought it was worth a preview.

(And all things related. Whatever they may be.)

Who doesn’t like icecream? (I know several folks, actually.) I like icecream a lot. I don’t love it, or live off of it, like my dad, his wife and my little sister do. They go through a few cartons of Edy’s Double-Churn and Breyer’s Light every week. I don’t eat enough icecream to justify buying it in the grocery – if I do, I’ll only buy a little-bitty one so I don’t waste money. And I buy only certain kinds.

It’s summertime – time for making icecream at home, like good hot weather-loving Southern folk ought to. And I’ve made a batch or two of my own, even without the icecream maker I’ve been promised, notably the green tea icecream a few posts down. But there are others I’ve seen, that I want to emulate or fiddle with, and if I don’t write them down, then I’ll forget to make them, and that would be a shame. So, forthwith:

Looking at the list now, that’s a whole lot of icecream and other frozen delights to be made. And tasted. And pondered. And I may not be able to make all of it before the icecream season’s over.